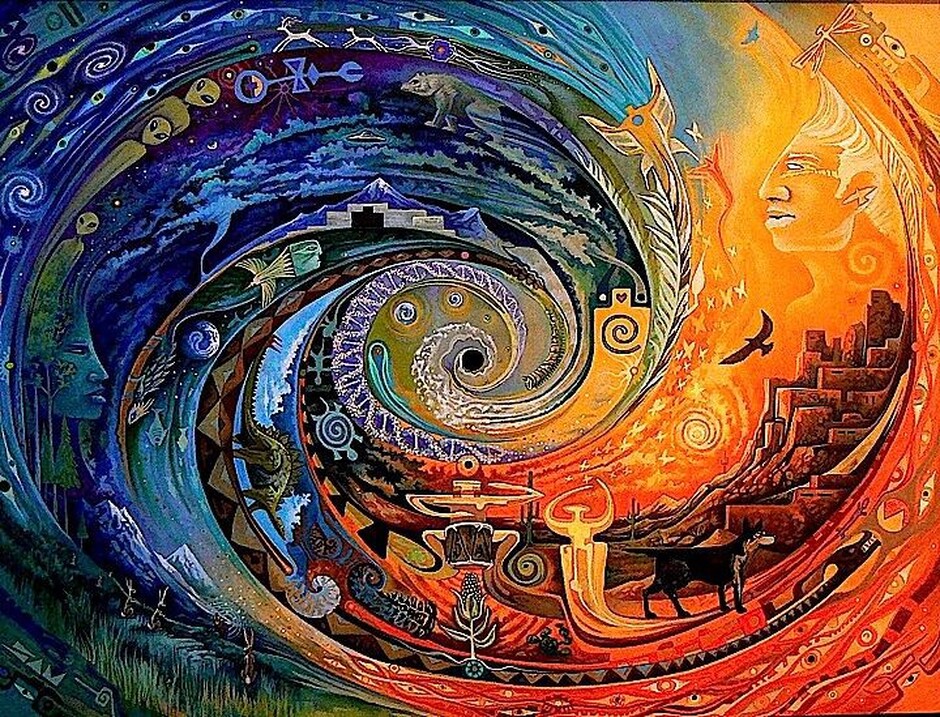 ​I met an Australian woman during her retreat in Bahay Kalipay in 2018. She did not know about the innerdance, prior to stepping into it. When asked to write about her first encounters, Jacqui shares : "as I heard Pi ask “how old are you?​,” I suddenly witnessed the process of creation; I saw time go back to the beginning and then speed up through the unfoldment of the manifestation of life. I saw worlds and universes being created. The sun arose and then set as the Earth came into form. I was somehow feeling and remembering what it all signified.

Later, during a second experience that evening, I again saw creation but more at a micro level. I saw many expressions of creation. I saw seeds blossoming into beautiful flowers. I saw baby chickens hatching and growing and other animals and plant life evolving. Suddenly I was floating in complete blackness...in the void. There was nothing here but stillness and peace. After a few minutes I saw source spiralling into creation. From a single point, it spiralled up and around, wider and wider as different things manifested into form. I watched as it expanded, it was energy manifesting into different dimensions and continuums.

As Pi asked “What is Time?,” I saw linear time expressed as a single viewpoint from this point of the spiral. As if it was possible to take in the expanded perspective of All-That-Is, to have access to everything at once, while somehow being able to focus all this onto a single direction, a limited single line of sight and slowing this down almost to a freeze frame. I could feel the innate balance of everything in my life, how all the people that I’d ever interacted with were drawn to me in complete balance and harmony. This showed and reflected some things within myself that I needed to see or feel. And that for every energy that exists, there is a counterbalance to that energy; I saw how the two balanced each other perfectly. That there was only ever, this harmony. I felt the energies of the different people who had come into my life and how I had created this ... for my own growth and expansion. And how they were all part of me and connected to me.

This whole experience was a conversation with myself. I was doing both the asking and the answering. As I would ponder a question, I am somehow guided into an experience that explores that thought, providing me answers to the question beyond what I could have ever conceived. It was a beautiful flowing dance of energy.

I then saw Source as a fragment of bright light that suddenly shoots off and then float into the blackness. I could feel that this spark of light was me. I then pondered how I existed simultaneously through different dimensions and realities and the spark of light then split and multiplied sideways.
​
It gave the effect of looking in a mirror with another mirror behind where there is an image within an image within an image.

Suddenly I was travelling down a green and blue portal which spiralled around like some kind of wormhole. Once I reached the end, I emerged at the entrance of a white semi-translucent light which filled the entire space in front of me, and I saw two gates on both sides of the entrance. The gates were open and I moved forward into the light. As this light surrounded me, I felt a graceful bliss come over me, a beautiful transcendence into a feeling of absolute love. I wondered what it would be like to be nothing but this light, to see all that it sees, to feel everything it feels. I tried to embody this experience but after a few minutes noticed I was holding tension in my body, a constriction from trying to force the experience by trying to perceive it through my physical sensors. At this moment, I completely let go and surrendered to the experience, to just receive it. As I became one with the light, I realised it was simply pure awareness ... consciousness ... love. But not love in the sense that most people understand it to be. This was the most unconditional love. When there is nothing else there, all that’s left is love. Its nothing and yet everything all at the same time. A love that remembers all that it’s ever loved and lived, chosen and experienced.

When I was touched on a point on the centre of my chest, my whole heart centre lit up and fully opened. It expanded from that point, outwards into a beautiful glowing sphere of white light encompassing my whole chest. Next there was electric blue and white streams of energy that looked like lightning coming down from an opening in the sky streaming into my chest. I felt the energy stream through my entire being, lighting up the every fabric of my self.

The whole experience was a divine remembering of all that I am which completely dissolved all illusions of separateness. It’s all just love and it’s beautiful! And it’s all perfect just the way it is. The experience left me with an overwhelming sense of peace and acceptance. It helped me fully experience and embody many things I knew conceptually but had never fully experienced in that way!"

By its very design, the innerdance process alters our Time Perception using some basic elements we take for granted - sound, touch, intention, position, electricity, breath - the concert of which, expands or contracts our subjective experience of Time and Space.

The Zeitgeber is a German term used in psychology that connotes the Time Giver, a concept we will uncover comprehensively through the course of the next months.

​​What is The History of Time?

Meditate on this:
a.) In our normal Wake States, we are conditionally bound by "The History of the World;" an unchangeable past that moves in forward motion through what Alfred North Whitehead calls The Arrow of Time.

b.) In Dream Consciousness, histories are unstable, revealing either "The History of History" or "The End of History." As Time Perception shifts wholesale across the world, the meanings of History and Historicity themselves undergo changes.

Jacqui describes time as “a single viewpoint from one point of a spiral. As if it was possible to take in the expanded perspective of All-That-Is, to have access to everything at once, while somehow being able to focus all this onto a single direction, a limited single line of sight and slowing this down almost to a freeze frame.”

Space and Time are the primary vocabulary elements in which consciousness becomes conscious of itself. They lay our structural foundations from which, our thoughts, behavior and experiences emerge forth.

In my own experience, I spent a long time in solitude, away from most things human. In this aloneness, I was made to remember Earth - not as a planet but as a resonant field filled with patterns, memory and possibilities.

Time was a Space I was able to access, within my body and the in the world around me. In becoming “like the earth,” or also “regaining the earth,” Time and Space were talking to each other as if separate entities, each of them implicating each other in a large and hectic middle place called the Becoming Time of Space and the Becoming Space of Time.

In the innerdance, it was as if the Earth learned to speak to itself through us. to do so, it needed a mediatory place, a medium in which earth’s many histories and geographies might meet, where translations and transformations happen.

Workshop Intention: Historicity is the gift you give to those who find the conditions by which True Time becomes rediscoverable.

Imagine if someone was given years in heightened awareness to meditate upon the nature of the world ... dozens, hundreds, thousands of it. Even millions Of years.

Would you give this quality time to yourself were You to receive it; and if so, what would you do with it? If you were stuck alone on an island or a cave, a mountain or the desert in solitude with your thoughts and feelings, where would your consciousness take you?

The Life Review is common to many cultures describing the phenomenon at that point of dying, in which “one’s entire life flashes before their very eyes.”

The Life Review need not happen in a spiritual process. In the innerdance, the unconscious instantaneously takes over the conscious mind, at times bringing condensed awareness to a Life in its totality. Such is the Becoming Time of Space.

The Becoming Space of Time is a much slower and conscious activity. Such is the gift of History.

What you know is simply what you know. The innerdance is a ritual signifying how parts of Knowing come together, in death or in life.